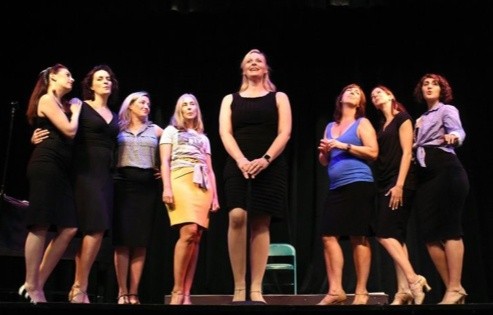 In its debut production, Victory Dolls, an eight-women vocal group, is presenting “I Left My Heart at the Stage Door Canteen.” The show, which was titled for the popular 1940s song of the same name, features World War II-era music in a song cycle showcasing three- part harmonies and tight vocal arrangements.

“Kevin Barrett, our producer, approached me awhile ago to put together a vocal harmony group inspired by the Andrews Sisters,” said Shelley Keelor, general manager of the show and one of the Victory Dolls.

However, rather than simply emulating the hit trio, the Victory Dolls have created their own sound with the help of Phil Hinton, who wrote original arrangements for the group’s first production.

Through their performance, the women seek to tell the tale of a formative time period in American history while also commemorating veterans’ service. They sing classics such as “Boogie Woogie Bugle Boy,” “White Cliffs of Dover” and “Swinging on a Star.”
“It’s also about teaching [audiences] the joy and heart in this style, in this time,” said Julie Kleiner Davis, who joined the group in June. “Everything has changed so much, but it’s a beautiful reminder of how wonderful this music is. It transcended so much in its time.”

A central tenet of the women’s mission as a group is to do more than just get booked. In future shows, they want to give back to the community.
For the Victory Dolls with military connections, the significance of the work takes on a whole other meaning.

“I come from a military family, and for us it’s pretty special,” said Sabrina Lynn Gore. “You can relate to that and give back to members of your family who have served.”
She said the group’s tight onstage harmonies translate to their offstage relationship. “There’s not always a lot of working women down here, so it’s nice to work with a group of women in a positive and encouraging environment,” she said.

Looking beyond “I Left My Heart at the Stage Door Canteen,” the group is planning to do a rock ‘n’ roll production and a holiday show while potentially adding more women to its ranks. They also want to involve themselves in the South Florida community, through connecting their shows to charities and hosting classes to share their skills with other young aspiring professionals.

“Philanthropy is important to us,” Keelor said. “We want to educate young artists, and we want to be women in our community that help other women, help children. We want to be role models.”

While their debut show revolves around a time that younger audiences will not remember, the Victory Dolls are working to bridge the generational divide to make their show appealing for all. They described their desire to cultivate a love of live theater with the timeless music while taking a step back in time to a period that had ripple effects for all generations during and after World War II.

“We’re preserving this period,” said Victory Doll Jeanine Levy. “We’re trying to educate these generations underneath the [World War-II era generation] to these songs, these stories and this history.”