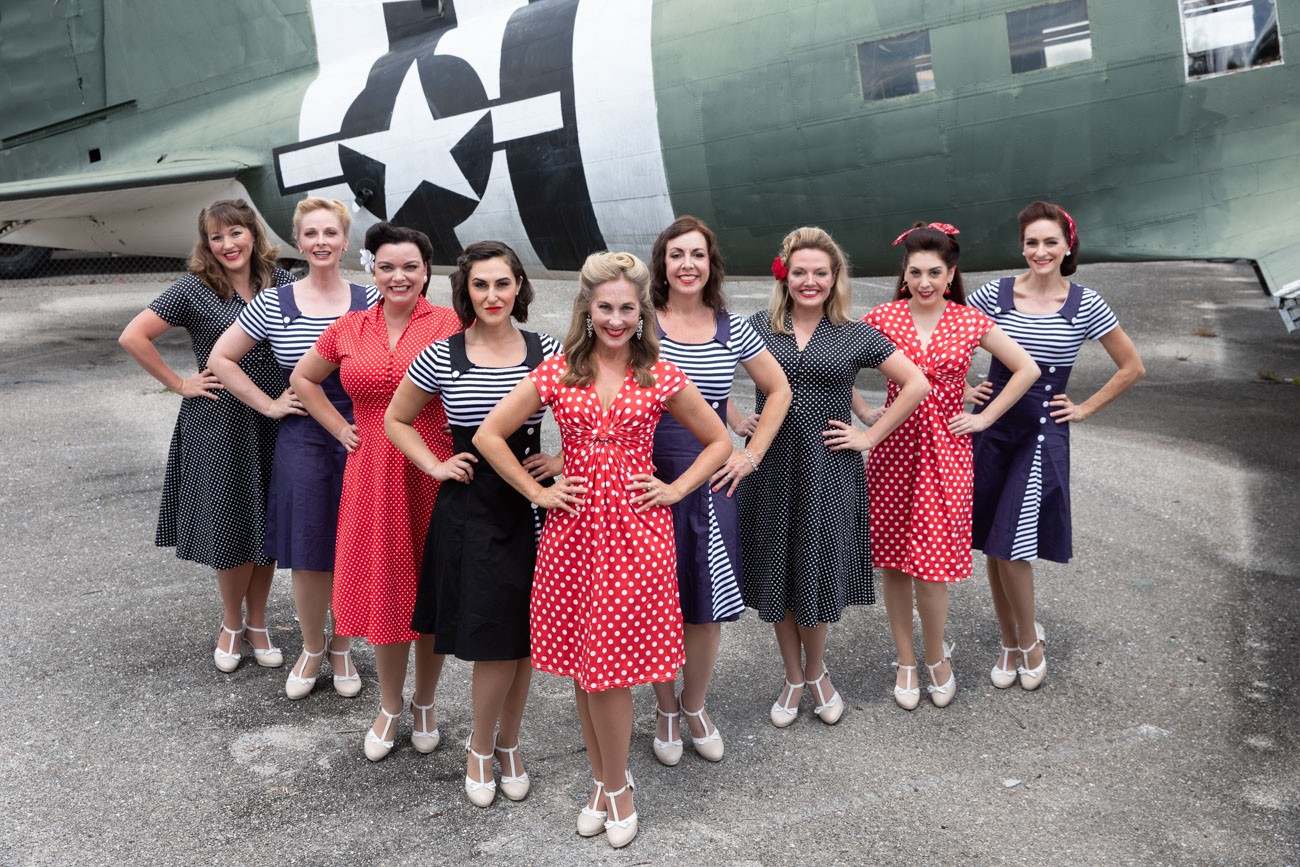 Memories of World War II are getting a shot in the arm from a group of talented stage performers and a veteran theater management CEO, all intent on reviving the music and cultural impact of the war period.

Kevin Barrett, a theater manager for 28 years who took over last year as director of the Delray Beach Playhouse, has joined forces with Carbonell Award-winning singer and actress Shelley Keelor to launch The Victory Dolls, an Andrews Sisters-inspired musical group made up of nine leading ladies from the regional musical theater.

The group — which claims to be the first of its kind in South Florida — is planning annual tours for Florida and beyond, and will call several South Florida theaters home each season, including the Delray Beach Playhouse, Mizner Park Cultural Center in Boca Raton and the Lauderhill Performing Arts Center.

“For most of my childhood, I was fascinated with World War II,” said Barrett, who is also CEO of Arts Center Management, a multi-platform theater management, consulting and production company.

“I’d go to the library and read about ‘The Greatest Generation.’ Earlier this year, I went to New Orleans for the opening of the World War II Museum.”

That institution has recreated the iconic Stage Door Canteen, a New York-based entertainment spot for Allied Forces personnel that also featured free food and appearances by the big stars of the era. The museum’s canteen features a production of World War II-era songs performed by the house group, the Victory Belles.

“I thought: This would kill in Florida,” Barrett said. “I remembered that Shelley Keelor did a World War II show here two years ago, so I pitched her the idea of creating one similar to the museum production. She loved it.”

Keelor gathered up a group of award-winning performers “based on their talent; people I respect” and dubbed them The Victory Dolls.

The musical team includes Phil Hinton, tasked with creating original arrangements for the shows, and Carbonell-winning keyboardist Caryl Fantel, who will serve as musical director.

Commenting on her own show of World War II-vintage melodies, Keelor said: “That era presented music like no other era. I always loved it, as did my mom.

“Kevin booked me for a show at the Delray Playhouse, and it was so well-received, I thought about it and said, ‘I would love to spearhead that effort,’” she said.

“Through music and great storytelling, this all-star group will seek to honor our brave and courageous veterans, military and first responders across the country, who work tirelessly to protect us all,” said Barrett.

All Victory Dolls performances will help benefit, support and raise awareness of nonprofit organizations that support groups such as Honor Flight of South Florida, the Gary Sinise Foundation and Wounded Warriors Families Support.

Besides singing favorites from the 1940s, the Dolls plan to offer an exclusive education program at area theaters starting with the 2019-20 season.

Titled “Developing a Successful Career in the Arts,” the course consists of master classes, workshops, weekly intensives and private lessons. It is intended to provide young thespians with essential skills needed to take the next step in their careers.

Both Keelor and Barrett noted that The Victory Dolls have been working behind the scenes for the past six months to perfect their first production, a signature concert and show titled I Left My Heart at the Stage Door Canteen.

Their debut concerts will take place Sept. 20 at the Delray Beach Playhouse and Sept. 21 at Mizner Park Cultural Center. Ticket information will be available soon.

Future shows will have different themes outside the World War II era, such as Rockin’ with The Dolls(1950s/1960s hits), Home for the Holidays with The Dolls, and All Dolled Up (Great American Songbook classics).