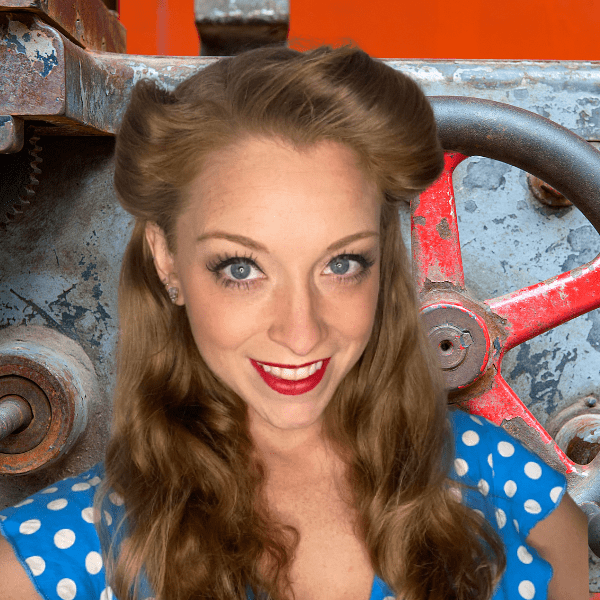 Born to a pair of thespians and native to the MD/DC area, Mallory is an actor, singer, and AEA member who spent her youth watching her parents perform in community theatre, where they happened to have met just years before in a little show called Company… So you could say her connection to theatre was birthed even before she was born… After spending her middle school and high school years delving deep into the world of theatrics, she also spent time playing keyboards in her high school jazz band and performing in an exclusive vocal group called Jazz Harmony. So her fascination with jazz and the music of such remarkable eras grew from a very young age. After realizing that theatre was more than just a passion and accepting it as a way of life, Mallory graduated with a BFA degree in Musical Theatre from Ithaca College and went on to spend the past 7+ years working professionally in the South Florida area.

“I was over the moon with excitement when I heard that The Victory Dolls were auditioning again… After following this gifted and gorgeous gaggle of women since their inception I have been both envious and eager to join in the camaraderie and partake in the magic that they spread touching so many souls through the music and lyrics of such a memorable era. I couldn’t be more excited to finally say that I no longer just look up to, but now stand amongst some of the strongest female musical performers in the state, as part of The Victory Dolls.”

After migrating down south, the stars aligned for Mallory as she found work at many of the incredible regional theaters ranging between Jupiter and Miami. Some of those theaters include: Maltz Jupiter Theatre, Palm Beach Dramaworks, The Wick Theatre, MNM Productions, Island City Stage, Outre Theatre Company and Area Stage Company.  She soon became the proud recipient of both a 2018 Carbonell Award for her performance of Janis Joplin in Beehive at The Wick Theatre, and a 2017 Silver Palm Award as an ‘Outstanding New Talent’ for her work as Janis in Beehive, Marta in Company and Belle in Beauty and the Beast. She then had the honor of receiving her second Silver Palm Award for her role of Bette Midler in the original work Bette & Barry: from Bathhouse to Broadway; and was overjoyed to have had the opportunity to originate a role in the world premier of Dracula: A Comedy of Terrors at Maltz Jupiter Theatre just before the pandemic hit. Mallory is grateful to have had the pleasure of working amongst many of the professional theaters along the South Floridian coastline and to have become part of such a strong theatrical community. During covid and the inherent theatrical shutdown, Mallory participated in a workshop with Short North Stage called Surviving the Moonlight and continues to coach acting, voice and audition prep virtually.

Favorite song growing up Since I was a musical theatre lover from the start, I had three favorite cassette tapes as a kid… Les Mis, Big River & Godspell. But I think my favorite song that I sang is still one of my favorites that I sing to this day… “I Dreamed a Dream” from my all-time favorite musical… Les Miserables.
Favorite cocktail  Irish Whiskey (neat)
Favorite female artist Hands down. Amy Winehouse. Though Etta and Ella remain a close second…
Fun fact about you As a certified “crazy cat lady” I take part in raising and caring for over 6+ cats all up and down the east coast… (Tater, Totz, Tangles, Groot, Kali & Meenah… the “+” accounts for the strays that I feed)